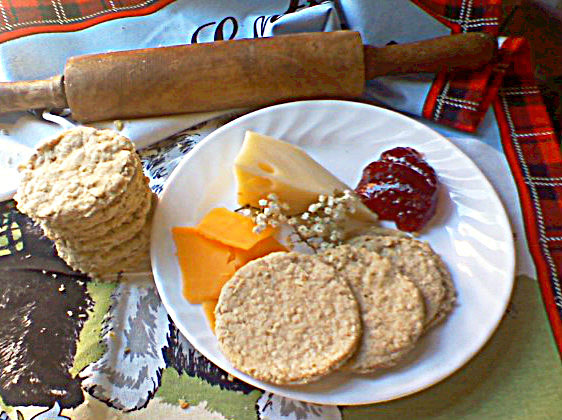 Oatcakes have Traditionally been referred to as Scotland's national bread. Indeed, history reveals that Oatcakes have been a staple diet since the 14th Century. When Scottish Clans were travelling, it is reported that each soldier carried a small sack of oatmeal. Mixing the oatmeal with water, they would use their shields as iron plates and cook it over an open fire.
Historically, oats were the only grain to withstand the harsh weather conditions of the Highlands. This is why oats are the ingredient used in many Traditional Scottish recipes.

There are many Regional variations of the Oatcake. In Edinburgh and the Lothians, wheat flour was also added. Unlike the Lowlanders, Highlanders would never use two kinds of grain. Their Oatcakes were only made with oatmeal with less fat and water, making them brittle. 'Bonnach Imeach', is an Oatcake from the Hebrides Islands, which is much thicker than other Regions. The Gaelic name means cake with butter.The different Oatcakes also reflected how finely the oats were ground. The finer the meal, the crisper the cake. 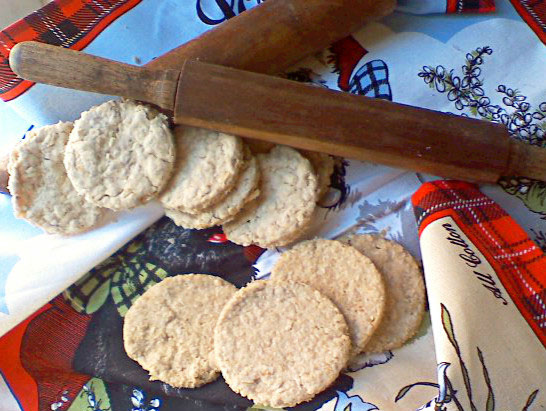 Traditionally, Oatcakes were cooked on a Girdle over an open fire. Today they can be replicated on a griddle or even more conveniently, in the oven. They were served with most meals, but today, they are most often presented on a cheese tray or served as a breakfast accompaniment. They have a tremendous nutty, wholesome flavour, and are also delicious with honey or jam. 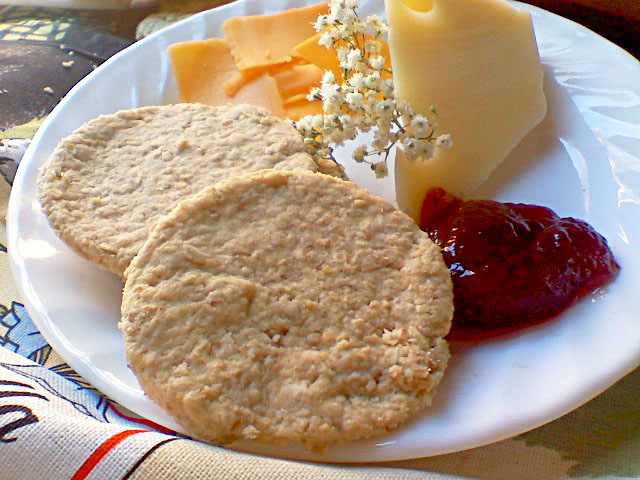 Today, Oatcakes are popular in many parts of the World due to commercial distribution. Oats are a significant source of dietary fiber, and have been proven to lower Cholesterol.
Here I am going to give you a Lowlander's Recipe which includes some flour. I find it easier to work with and more palatable. I made two variations of grind also. One using Old Fashioned Oats as they come, the other I processed the oats to a much finer grind. As you will see from the pictures, the finer grind oatcakes are much thinner and produce a much crisper product. This is my preferred Oatcake. 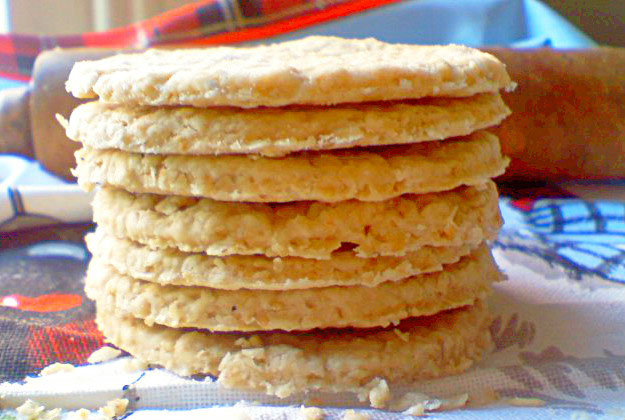 1/2 cup All-Purpose flour
1 cup Medium Oatmeal [I used Old Fashioned Oats which I had on hand, processing them to a fine meal in my food-processor]
3 oz Fat, melted [Traditionally used Bacon drippings, but Butter can be used as I did]
1 tsp Baking Powder
1/2 tsp salt
Hot Water to mix

Place flour, oatmeal, baking powder and salt in a bowl.
Make a well in the center and add the melted fat and enough water to make a stiff dough.
Transfer to a flat surface, lightly sprinkled with oatmeal and knead thoroughly. [Should look like rough cookie dough]
Roll out the dough to 1/8 inch thick.
Either make into a circle and cut into triangles, or use a cookie cutter for more uniform cakes.
Transfer to a baking sheet and bake at 300 degrees F for 30 minutes.
Enjoy warm or store in airtight container.

Alternatively, if you would like to try the more Traditional Girdle method of cooking......
Set your griddle on medium heat. The Oatcakes take about 3 minute to cook. They are done when the edges start to curl. Then put them under the broiler until they are slightly brown.

NOTE :
I tried the griddle method and had a difficult time regulating my heat, so I opted for the more precise method of baking in the oven.

The dough is very forgiving, if you get cracks while rolling, just pinch together with your fingers. These are not Gourmet masterpieces but good wholesome treats !

Serve them as an 'on the go' energy breakfast with a little honey.
They are wonderful served with a variety of cheeses and fruit, rich in fiber !

Mary
Thank you for stopping by! I'm a Scottish Lassie now living in the USA.My blog was created to share favourite recipes from my own kitchen and those I stumble upon in the vast blogging community. I hope to also highlight Scotland's amazing cultural cuisine and dispel the myths that all we are about is Haggis and Neeps [turnips]. Along the way I'll throw in some historical snippets and cultural musings. So if you have ever been curious or just wanted to know a wee bit about the land of my birth, follow me on my travels and lets see where it take us !